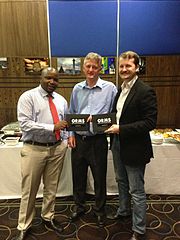 The Wiki Loves Monuments competition in South Africa ended off on a high note with the Award Ceremony on Saturday, 23 November 2013 at the Premier Hotel in Midrand. A total of 89 participants entered this year with a total submission of 6,432 photographs. This is a fantastic increase from the 1,858 submitted last year and exceeded our target for 2013 of 5,000 photographs by 22%!

Unfortunately Leo ZA1 was unable to attend the awards so Nick Roux accepted on her behalf.

We would like to thank all of our partners and the participants in the 2013 Wiki Loves Monuments photographic competition.